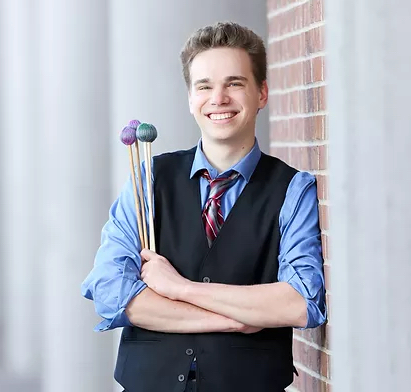 Video game enthusiast Matt Silverberg has carved a niche in the music world thanks to his love of video game music and the marimba. His video game arrangements have garnered thousands of views on YouTube including his arrangement of Dragon Roost Island which was shared by Zelda Universe and received over 48,000 views on their Facebook page. In addition to arranging a plethora of video game tunes, he has performed as a soloist at numerous conventions in the Twin Cities (2D Con, VGM Con, Dulucon, and Harmonic CONvergence) and other video game oriented events.

In addition to video game conventions, Matt has also performed internationally, in numerous pit orchestras, at Valleyfair amusement park, with the Eau Clare and the Dubuque Symphonies, the Heartland Marimba Ensemble, VocalEssence, and has been heard on Iowa Public Radio. He competed in the Great Plains International Marimba Competition where he was complimented on his tone and musicality and was the featured music graduate at the Peck School of the Arts graduation convocation where he performed Joseph Schwantner's Velocities in May of 2017.

As a composer, his works have been performed at numerous universities, internationally, and featured at various events. His percussion quintet Hypnotic Crystals was selected as a winner for the 2017 Wisconsin Alliance for Composers (WAC) New Music Festival and the large chamber version of Silver Filled Dreams was featured on a panel at the MidWest Band Clinic in December of 2020. He’s had commissions ranging from percussion ensemble, chamber works, full wind ensemble, and orchestra. Matt has an EP of original Electro Pop Rock Marimba music titled Marimbtronics.

Matt has given music presentations to middle, high school and collegiate students about the life of a musician and how video game music is an important part of the musical experience. These presentations have been met with high praise and enthusiasm. He has extensive teaching experience ranging from beginners up to collegiate players and currently freelances and teaches in the Minneapolis/St. Paul area.